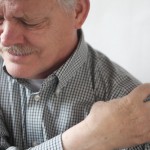 Prevention is key Sports massage should play an important role in the life of everyone, whether they are injured or not. Sports Massage Therapy is for everyone. For injury. For pampering. For deep relaxation.

Who does it affect?

Frozen Shoulder is extremely uncommon amongst young people, and is almost always found in the 40+ age group, usually in the 40-70 age range.  Approximately 3% of the population will be affected by this, with slightly higher incidence amongst women, and five times higher prevalence in diabetics.

What is Frozen Shoulder?

Adhesive Capsulitis is the medical term for Frozen Shoulder – sometimes abbreviated to FSS (frozen shoulder syndrome).  This is a condition which affects the ability to move the shoulder, and usually only occurs on one side.  Sometimes the problem can spread to the other shoulder (approximately 1 person in 5).

There are two classifications of frozen shoulder syndromes:

It is not known exactly what causes this problem, however it is thought that the lining of the joint (the capsule) becomes inflamed, which causes scar tissue to form.  This leaves less room for the humerus (arm bone) to move, hence restricting the movement of the joint.

This condition has been described in three phases, so the symptoms will differ depending on the phase of the condition